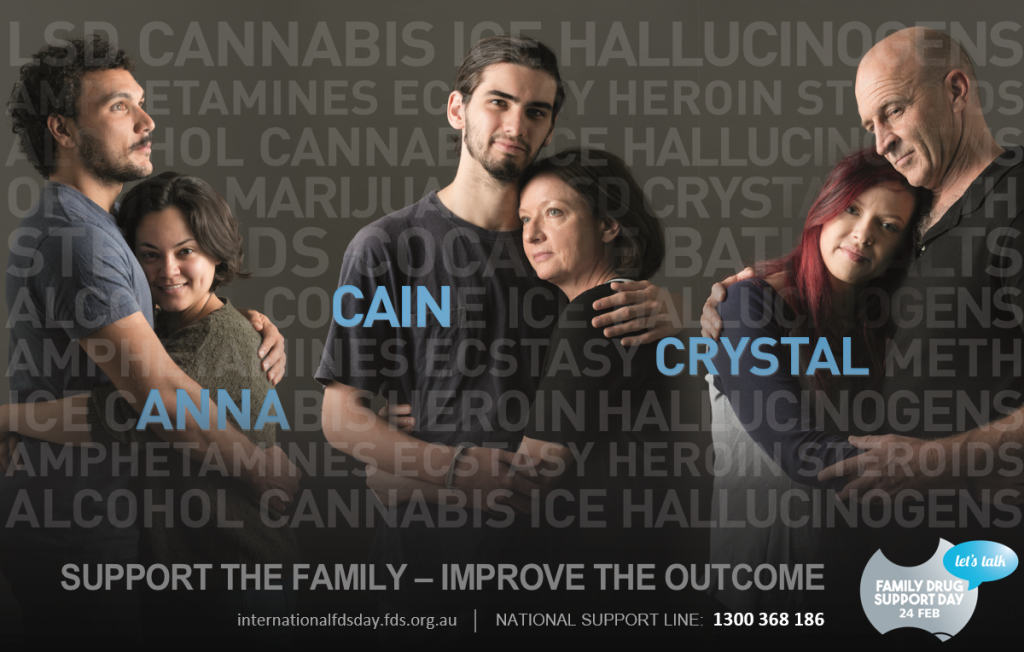 When clinicians, politicians and media talk about drug and alcohol issues affecting our communities they often raise the importance of assisting, supporting and engaging more with families.

Unfortunately for many families, the reality is much different.

Behind every statistic of a drug-related overdose death, arrest or hospitalisation there is a family suffering the pain. All too often in a cloud of stigma and shame.

The 1st National Family Drug Support Day was held on the 24th February 2016 – the anniversary of the passing of Damien Trimingham from a drug-related overdose – and has become an annual event to highlight the need for families to not only be recognised and heard but to be supported and encouraged to speak about their concerns and their needs.

Information and phone numbers for Tasmanian alcohol, tobacco and other drug services.

Caring, non-religious organisation which provides non-judgemental, non-directive support and information to
families and friends of drug and/or alcohol users.

Confidential, non-judgmental telephone counselling, information and referral service for
anyone seeking help for their own or another person’s alcohol or drug use.

Help available for struggles with alcohol and drugs

This opinion piece was published by The Examiner and The Advocate on Monday 24 February for International Family Drug Support Day.

We drink to celebrate, to commiserate and it’s a central part of how we socialise with our friends and family.

I’m a seventh generation Tasmanian, with my ancestors arriving into Launceston in the 1840’s.

I am descended from William Johnson and Anne Mariner, with William arriving in Launceston in 1841, who married his wife Anne in 1851.

Anne was the daughter of William and Elizabeth Mariner, both convicts who spent time at Port Arthur.

After being freed, William and Anne moved to Launceston in 1842 where among many things, William was the licensee of the former Marrowbone and Cleaver Hotel in Frankland Street.

Alcohol played a big part in their lives, and not just through the Hotel.

This very paper, The Examiner, announced the death of Elizabeth Mariner, my great, great, great grandmother, on the 14 October 1848 reporting that she took her own life with a piece of rope tied to her bed post.

Elizabeth’s death certificate details that she hanged herself while ‘in a state of insanity caused by excessive drinking’.

It’s easy to suspect that after spending time at Port Arthur that alcohol provided my grandmother with an escape from whatever trauma she may have experienced whilst serving her sentence.

It’s also reasonable to expect that her drinking, and her death greatly impacted her husband and her children.

Fast forward 170 years, society has changed but our community’s complicated relationship with alcohol and other drugs continues, and my family is no different.

My grandmother, who was born in Zeehan in 1928 passed away in Ulverstone in 2017.

Before she passed she shared stories with me, including those of her father and the impact alcohol had on his relationship with his children.

My grandfather, who lived his life in Wynyard, also had a ‘beer problem’ and based on the stories of my family, he was not a nice man when he was drinking.

In my lifetime, alcohol has been present but more so the presence of other substances.

I have watched people I love struggle with cannabis dependence where they couldn’t make it through a day and being unable to hold down employment.

I have witnessed the impact of morphine and sleeping tablet dependence while sitting quietly in their home while they are passed out to ensure they remained safe.

I have watched as people I care about deal with violent interactions with alcoholic fathers and move states to leave alcoholic partners.

I know someone who lost a mother to heroin and also their brother to methamphetamine, and another who lives with the impact of being king-hit by a drunken stranger years ago.

I share these personal stories because I know that my family is no different to any other and everyone has someone in their life who has been impacted by alcohol or other drugs.

Particularly alcohol, which despite the harm that it can cause and the impact that it can have on our families and across the community, it will continue to be a key part of our Australian way of life.

There were no support services available for my ancestors in Launceston during the 1800’s or in Zeehan in the 1930’s or in Wynyard in the 1960’s.

I certainly don’t remember there being any support available for me, and if there was I certainly wish I knew how to access it.

I also don’t recall knowing where I could go to seek help for my friends and family who were struggling with their drug use.

Things have changed and we now have information and options that my family and Tasmanian ancestors did not.

The impact drugs have on families is increasingly being acknowledged with the 24 February being recognised as National Family Drug Support Day since 2016.

With the aim of raising awareness of how drug use impacts families, it also seeks to encourage families to speak about their concerns and their needs.

If you, or someone you know is feeling the impact of drug use, whether it be alcohol, tobacco or other substances including pharmaceutical medications, please reach out for more information.

More information on services available across Tasmania is in our Service Directory or you can call the 24-hour confidential Alcohol and Drug Services Hotline on 1800 811 994.

Alison Lai is the chief executive officer of the Alcohol, Tobacco and other Drugs Council of Tasmania.